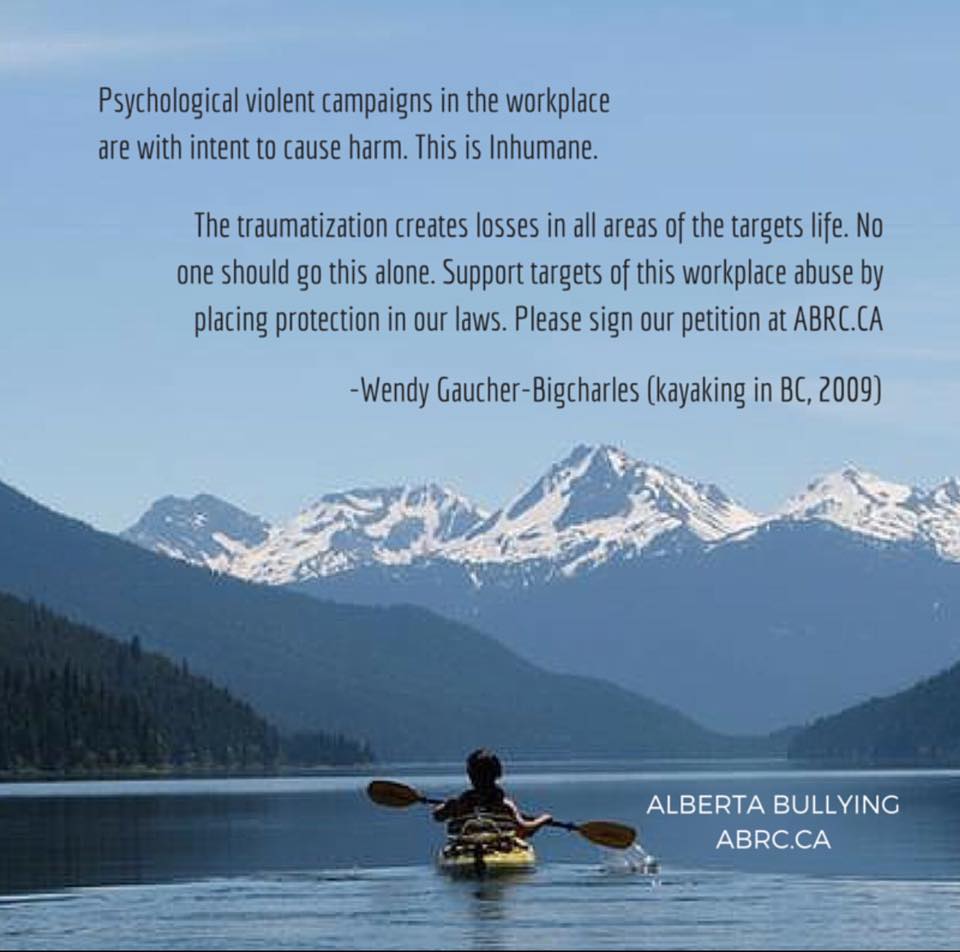 This website is published with great regret. I have repeatedly tried to get Grant MacEwan University to address these concern privately, but they adamantly refuse and are intent at suppressing this information. This website exists to help me heal, to inform and assist those still at MacEwan, to increase public awareness, and to reduce the probability of a similar occurrence at another educational institution. This website contains contemporary records that substantiate the information in the summaries below.

It has taken me a long time to make sense of what happened to me. As succinctly as I can put it:

I was faculty at MacEwan, active in the scholarship of teaching and learning (SoTL), active in institutional affairs, requested to sit on institutional committees, and an advocate for quality educational programming. Sometime in 2008, one or more MacEwan Administrator decided that I must go. Allegations against me were fabricated and exaggerated. Policy and process were abandoned to bias and control the process, to expedite the process, and to prevent appeals. These Administrators ignored their own legal advice. They suppressed an arbitration decision provided by their lawyer because it did not support their objective. They were judge, jury, and executioner with one objective: get rid of me.

My responses and defenses were ignored and my concerns and complaints were dismissed. (I later discovered that the person I was submitting the concerns and complaints to was a member of the group, and that her involvement in the group was purposely suppressed for exactly this reason.) The Faculty Association told me that my issues were not in the perview of the Faculty Association; they repeatedly refused to represent me. I was ultimately forced out of MacEwan after over three years of this treatment. Now years later, I still suffer from the abuse.

I FOIP'd MacEwan and received records showing collusion of administrators; that the VP Academic's involvement was purposely not disclosed so she could appear impartial, receive and hear my complaints, and then dismiss them; that administrators were struggling to justify terminating me; that their own attorney did not support their actions; that their own attorney provided them with an arbitration decision confirming my innocence (they ignored this document); that they knowingly and purposely biased “independent” investigations; and that the VP Academic lied about receiving independent reports of my guilt, and used this fabricated evidence to justify terminating me.

Today's Administration and Faculty Association are focused on suppressing these events instead of fixing the problems. By not addressing the problem, they are abusers themselves and condoning the abuse of current faculty and staff. This is not how a real university operates nor is it in the best interests of MacEwan students, staff, faculty, or MacEwan itself.

A summary of what I knew at the time of my forced departure is available here: my final expression of concern and plea.

The worst form of abuse?

The more clever and effective strategy is to wear the target down emotionally by shunning, gossip, ridicule, bureaucratic hassles, and withholding of deserved rewards. … Many targets crumble, flee to a job elsewhere, or take early retirement. Others surrender to the collective will, behaving thereafter like a dog that has been bested by another dog in a fight for dominance.

If the target refuses to leave or acquiesce, … the object [becomes] to destroy the good name that is any professor’s main resource, to expose the target as not worth listening to. Public censure by the university administration leaves the target stigmatized for life. Formal dismissal with attendant publicity is social elimination in its most conclusive form.

Most [targets] will be idealistic high achievers with loyalties higher than the local powers that be. Most of the mobbing targets I have studied were dumbstruck that such impassioned collective opprobrium could be heaped on them. … They trusted overmuch in reason, truth, goodness, and written guarantees of academic freedom and tenure.

Workplace mobbing is a ‘virus’ or a ‘cancer’ that spreads through malicious gossip, rumour, hearsay, and unfounded accusations. It is done with deliberate intent to have those targeted ‘eliminated’ or ‘forced out’ of their employment.

Those targeted for mobbing are often:
• change agents
• high achievers
• enthusiastic
• whistleblowers
• known for their commitment to human rights

Mobbing occurs in environments conducive to its development: … workplaces with poor management lacking in conflict resolution skills and lacking in awareness about mobbing and its consequences. Worse still are workplaces where management knowingly utilizes mobbing tactics as a means to eliminate staff in spite of the, sometimes fatal, devastation it causes.

The bullies will systematically discredit their target to erode any support the target may seek out later. Bullies slander their target’s reputation to anyone who will listen: co-workers, management, union representatives, human resources, etc.

A mobbing is this larger involvement of the group in the bullying. Management and unions withdraw support and eventually participate in attacking the target with as much enthusiasm as the (original) bully. Co-workers are afraid for themselves and either look the other way or actively participate. The group is set against the individual.

[Workplace mobbing] is a dysfunctional group response to the abuse of one of its members. Rather than address the abuse, the group instead seeks to silence and destroy the member. It is like a disease that causes the body’s immune system to destroy healthy parts of itself.

Make no mistake, mobbing is devastating, and leads some targets to suicide. If you — the reader — are the victim of bullying, harassment, and/or assault and those responsible aren't doing anything about it (or they are the ones engaged in it), you need proof: emails, letters, recorded conversations, etc. You also need support: at minimum, find a confidant, a lawyer, and a support group. Engage the people and organizations — unions, human resources, etc. — that are suppose to assist you. If they do, great. If they don't, you have a claim against them as well.

Launched in January 2016, the simple fact that PrairieU.ca is still online is indicative of the truthfulness of the information herein. And of the absolute and continued failure of MacEwan Administration.

A leading researcher in workplace mobbing calls PrairieU.ca a case study of academic mobbing presented in a calm, reasoned, and balanced way.

MacEwan focused on oppressing me. After leaving, my capabilities and achievements became evident.